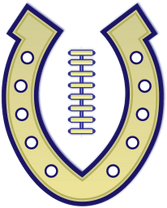 The original #TheStable member. CJ started training with Coach John Kaleo and other top QB trainers in the country while in youth league.  CJ had a storied career at Alonso HS in Tampa, throwing for 60 TD's , over 6000 yards and  6 TD's in the schools only playoff victory ever.

CJ was the 2009 winner of the Guy Toph Award, annually given to Tampa Bay's best player.

CJ earned a D1 scholarship to the University of South Alabama and in his freshman year he started and lead his team to an undefeated season. CJ finished playing at Murray State under the guidance of one of the originators of the Air Raid offense, Chris Hatcher.

Coach CJ then became a Division 1 coach and has been at FAU, Maryland and Samford. He coached Safeties, WR, RB, and QBs and recrutied Tampa and South Florida in his 4 years at the division 1 level. At Samford Coach CJ worked with the Walter Payton Award winner as the best player in FCS, Devlin "Duck" Hodges.

Coach CJ has come back to his roots in #TheStable to pass on the knowledge that he has learned from his playing and College Coaching days.

Coach Chip has been training QB's for over 35 years. He has coached at numerous High Schools in New York and Tampa. Coach Chip has coached at QB camps around the country and has been invited to coach QB's on college campuses. He also works camps and combines in the local area. Other than training duties Coach Chip handles the recruiting for our athletes. Coach Chip is in contact with numerous college coaches at all levels of football and is often consulted by Power 5 programs for his opinion on QB's throughout the country. He has worked with some of the top QB trainers in the country. Coach stays in contact with coaches like John Kaleo, Darin Slack, Will Hewlett, Dub Maddox sharing training techniques and often helping them out with his recruiting contacts.

John Kaleo founded Kaleo QB Academy after a Hall of Fame career in The Arena Football League. Coach Kaleo has trained the best QB's in the Tampa Bay area since 2006. John currently works with NFL QB's and College players who are starting their careers in professional football Coach Kaleo is also the Regional Combine Director for the NFL.